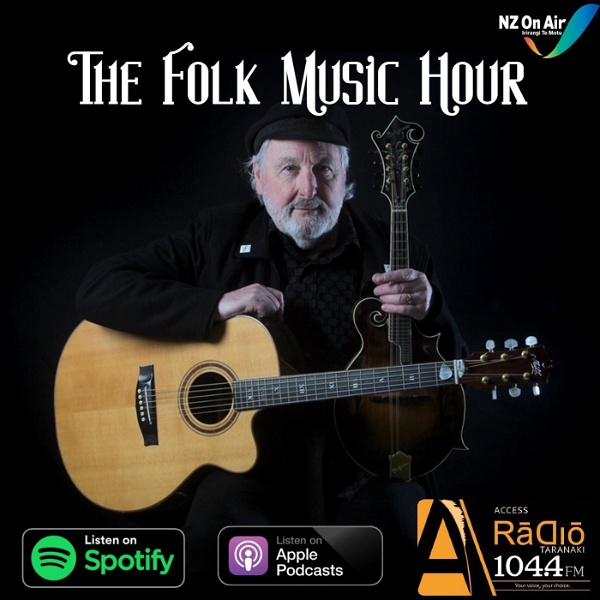 David Calder presents the music he loves in The Folk Music Hour, with the aim of rekindling listeners' interest in acoustic music in the Anglo-American tradition, including NZ folk song, and world folk music such as that heard at WOMAD in New Plymouth's beautiful Brookland's Park. Almost all music has a folk origin: blues, jazz, rock and even so-called classical. As Big Bill Broonzy famously said - "all songs are folk songs; ain't never heard a horse sing!" Arguably the first Kiwi to make a living with a mandolin, David spent some of his musical life playing bluegrass, but was performing in the folk boom as early as 1964. He was playing in Europe and the UK in the 70's, dabbling in folk rock and pop in California in the 80's, and creating a country garden in the 90's and teaching children to read. These days, kind of retired, he is free to pursue any of the musical paths he loves: song-writing, tuition, and performance with guitar, piano, banjo, mandolin, autoharp, dulcimer, even bass;... more

Do you want to know how many people listen to The Folk Music Hour? Or perhaps how many downloads it gets? Rephonic has scanned the web and collated all the information we found in our podcast database.

A playlist of songs accompanied by a folk guitar style way more delectable than fried chicken.

Three-part harmony sounds good, so the trio has a long history in groups, folk and beyond.

We cannot let Joni’s birthday pass without her music, our admiration and some welcome news.

Where can I find podcast stats for The Folk Music Hour?

Rephonic provides a wide range of data for two million podcasts so you can understand how popular each one is. See how many people listen to The Folk Music Hour and access YouTube viewership numbers, download stats, chart rankings, ratings and more.

How do I find the number of podcast views for The Folk Music Hour?

How do I find listening figures for The Folk Music Hour?

Podcast streaming numbers or 'plays' are notoriously tricky to find. Fortunately, Rephonic provides estimated listener figures for The Folk Music Hour and two million other podcasts in our database.

How many subscribers does The Folk Music Hour have?

To see how many followers or subscribers The Folk Music Hour has, simply upgrade your account. You'll find a whole host of extra information to help you decide whether appearing as a sponsor or guest on this podcast is right for you or your business.

How many listeners does The Folk Music Hour get?

How many episodes of The Folk Music Hour are there?

The Folk Music Hour launched 2 years ago and published 40 episodes to date. You can find more information about this podcast including rankings, audience demographics and engagement in our podcast database.

Where do you get podcast emails for The Folk Music Hour from?

Where does Rephonic collect The Folk Music Hour reviews from?

How does Rephonic know which podcasts are like The Folk Music Hour?

You can view podcasts similar to The Folk Music Hour by exploring Rephonic's 3D interactive graph. This tool uses the data displayed on the 'Listeners Also Subscribed To' section of Apple Podcasts to visualise connections between shows.