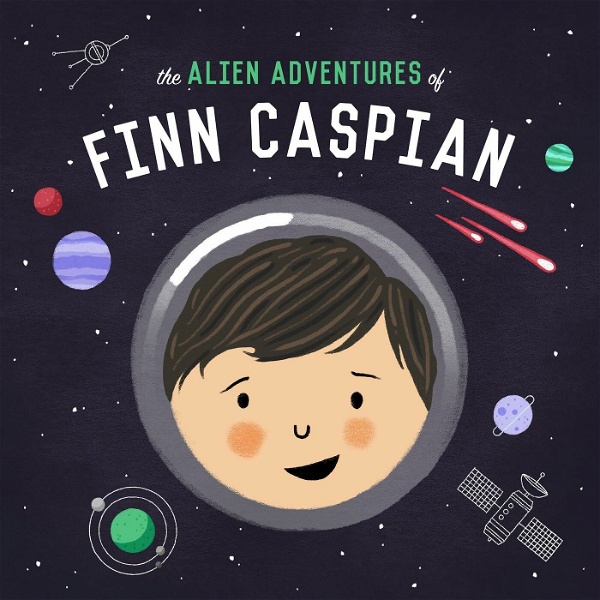 The Alien Adventures of Finn Caspian: Science Fiction for Kids

The Alien Adventures of Finn Caspian is a serialized science-fiction story for kids (start with Episode 1), told in 15-20 minute episodes for parents to put on when driving around town, or to marathon on road trips, or to bond over before bed.The story centers on Finn Caspian, an 8-year-old boy aboard The Famous Marlowe 280 Interplanetary Exploratory Space Station. He and his friends Abigail, Elias and Vale are Explorers Troop 301, taking off from the Marlowe to explore uncharted planets, help the occasional alien, and solve a mystery that threatens to destroy the Marlowe. When pressed, we describe it as a "mystery gang" story, sort of like Scooby-Doo in space.The story is written and performed by Jonathan Messinger, author of Hiding Out, former web editor of Time Out Chicago Kids, and father of two boys. His son Griffin, 7, serves as editor of the story, appearing in episodes to critique, make predictions and express skepticism that his father knows what he's talking about, which also... more

Do you want to know how many people listen to The Alien Adventures of Finn Caspian: Science Fiction for Kids? Or perhaps how many downloads it gets? Rephonic has scanned the web and collated all the information we found in our podcast database.

Hi! We're back and ready to get this season rolling! more

Flip & Mozi's Guide to How To Be An EarthlingTinkercast | Wondery

Frequently Asked Questions About this podcast

Where can I find podcast stats for this podcast?

Rephonic provides a wide range of data for two million podcasts so you can understand how popular each one is. See how many people listen to this podcast and access YouTube viewership numbers, download stats, chart rankings, ratings and more.

How do I find the number of podcast views for this podcast?

How do I find listening figures for this podcast?

Podcast streaming numbers or 'plays' are notoriously tricky to find. Fortunately, Rephonic provides estimated listener figures for this podcast and two million other podcasts in our database.

How many subscribers does this podcast have?

To see how many followers or subscribers this podcast has, simply upgrade your account. You'll find a whole host of extra information to help you decide whether appearing as a sponsor or guest on this podcast is right for you or your business.

How many listeners does this podcast get?

How many episodes of this podcast are there?

this podcast launched 6 years ago and published 228 episodes to date. You can find more information about this podcast including rankings, audience demographics and engagement in our podcast database.

Where do you get podcast emails for this podcast from?

Where does Rephonic collect this podcast reviews from?

How does Rephonic know which podcasts are like this podcast?

You can view podcasts similar to this podcast by exploring Rephonic's 3D interactive graph. This tool uses the data displayed on the 'Listeners Also Subscribed To' section of Apple Podcasts to visualise connections between shows.